Awkward title, I know, but let me explain myself. Today marks the first installment on my series based on different character created by Tori Amos. A friend suggested I go with the woman who represents "Rattlesnakes" from the Strange Little Girl album. Neil Gaiman wrote mini- stories to go along with each character and here is hers.

She doesn't know who owned the jacket originally. Nobody claimed it after a party, and she figured it looked good on her.

It says KISS, and she does not like to kiss. People, men and women, have told her that she is beautiful, and she has no idea what they mean. When she looks in the mirror she does not see beauty looking back at her. Only her face.

She does not read, watch TV, or make love. She listens to music. She goes places with her friends. She rides rollercoasters but never screams when they plummet or twist and upside down.

If you told her the jacket was yours she'd just shrug and give it back to you. It's not like she cares, not one way or the other. 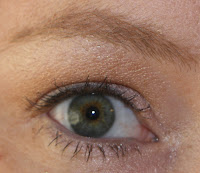 This is a very wearable neutral look with a touch of glamour in the super shiny lip. While it appears simple, I used a butt ton of products. The glowy look her skin had in the photo was hard to achieve so here's the list. Long list is long!

So tell me,did I do the look any justice? Any suggestions for my next character?

*I do not own or claim to own this video
Posted by Melissa at 5:59 PM

Melissa
I am a Christian, wife and mother. These are the thoughts that run through my head on any given day; ranging from religion and family, to makeup and Warcraft. You can email me at melissa.blackburn01@gmail.com

Other folks who wander with me